Shawn fell in love with beer and brewing right from his very first batch, brewed at home over 25 years ago.

Working as Brewer and Head Brewer for Murray’s Craft Brewing Co from 2006 to 2014, Shawn earned a reputation for brewing award winning, innovative and full-flavoured beers. In late 2012 he was awarded Australian Brewer of the Year.

From almost the moment he started brewing, Shawn has dreamed of having an authentic brewpub like FogHorn. As a “brewing purist” he believes this model is best for producing the freshest, finest tasting beer. He also loves the freedom to brew a wide range of beers that people won’t find anywhere else. Playing with flavours and styles is his passion.

Shawn teamed up with James in 2014 and together, they decided to start their own small brewery from an abandoned warehouse in the centre of Newcastle. As a proud local, Shawn was keen to contribute something positive to the ongoing revitalisation of the Newcastle CBD.

For Shawn, it has been and always will be about the beer. His mission for FogHorn Brewhouse is to provide a high quality hospitality experience while producing the best, most flavoursome, most interesting beers in the country. Converting mainstream beer drinkers to the world of flavour available in Craft Beer is at the heart of Shawn’s passion for brewing.

A Day in the Life of the FogHorn Brewer

The night before: give the grains a crack
Before anything else, we need to select the different grain combinations we’re going to use, depending on the type of beer we want to brew.

Once we’ve chosen a cocktail of malted barley, wheat, rye, oats and whatever else tickles our fancy, we run it through the grain mill, lightly cracking the malt so it’s all laid out and ready to go in the morning.

7am: get our boiler on
The boiler needs to be nice and hot in order to generate steam and heat the water for the brewing process. Our water is triple-filtered to eliminate all chemicals and impurities and the temperature needs to be closely monitored throughout the day.

Next we start the motor on the auger; a long steel coil that carries the grain from the mill up to the top of the brewery. The next time you visit us, take a closer look and you’ll see our auger hidden in a white PVC pipe at the top of the brewery connected to the mash tun. We have spare auger coil on display at FogHorn Brewhouse Erina.

7:30am: start mashing
In the mash tun, the selected grains are mixed with water and over the course of an hour, their starches are naturally converted to maltose (malt sugar), which will then ultimately be fermented into beer.

The temperature of the mash needs to be very precise – between 62C and 72C℃ – differing within that range from beer to beer. Mashing with lower temperatures will result in a lighter-bodied beer with a dry finish, while higher temperatures give us a heavier, richer, maltier beer.

This maltose from the mash is the only sugar you’ll find in our beer. Unlike most mainstream breweries, we don’t add extra corn, cane or rice sugars and we definitely don’t add preservatives.

9:30am: lauter and sparge
While it may sound complex, this process simply involves slowly rinsing the mash to collect the malt sugars (now called sweet wort), leaving the grain behind in the mash tun. This process takes around 1½ hours.

Here at FogHorn we don’t like to waste anything, so once the grain is rinsed, it is shipped away and fed to local cattle and pigs, or (even better) is used to make our delicious homemade crispbread.

11:30am-12:00pm: all hopped up
From the mash tun, the sweet wort is then moved over to the kettle, where it is boiled for 90 minutes. While in the kettle we add the hops, which will give the beer its bitterness and also contribute an array of flavours and aromas. Each of our beer recipes has a unique balance of hoppy bitterness to malty sweetness!

1:30pm – 2:00pm: take it for a whirl
After the boil, the wort is transferred to the whirlpool, which spins the wort at high speed separating all remaining solids and leaving as clear a liquid as possible as it slows to a stop.

2:30pm – 3:00pm: the FogHorn Hop Back
This is our favourite part of the brewery! Our Hop Back basically acts like a huge stainless steel coffee plunger where we can infuse our unique hop flavours, spices, fruit, shellfish – whatever takes our fancy!

Later that day: bring on the yeast
Once the wort is cooling and on the move over to one of our six fermenters, we add the yeast and begin the fermentation process. This can take anywhere from 4 days to several weeks. At FogHorn Brewhouse, we prefer not to rush perfection.

Fermentation is when the wort becomes beer. There are two main types of yeasts used in brewing: lager and ale. The lager yeasts ferment at a cooler temperature than the ale yeasts, taking longer to ferment, and producing more subtle flavours and aromas. Ale yeasts are stronger in flavour in the finished product. Most FogHorn beers are ales.

When it’s ready: the beer grows up
Finally, the fermented wort goes through a process called conditioning, where it is given time to mature and develop its full spectrum of flavours and aromas.

At FogHorn Brewhouse we believe that fresh is best, which is why we rarely filter and don’t bottle or can our beer. After maturing, the beer is carbonated and served straight from our 1800L serving tanks or from kegs. You just can’t get fresher than that!

Summer Ale
The most popular beer at FogHorn, we brew the Summer Ale fresh every two or three weeks. It has a fruity US late hop aroma and just enough German pilsner malt to balance. An easy drinking but flavoursome beer, with a cleansing bitterness and dry finish.

Boganaire IPA
One of our early favourites, the Boganaire Session IPA has solid bitterness, citrus and pine whole cone hop flavour and aroma. For a bitter beer, the Boganaire is insanely drinkable.

The Ideas Beer
One of our brilliant experiments, The Ideas Beer is a wheat beer with hop character, but no spices. It’s got flavour and body, with great drinkability. It’s a beer of many parts.

At FogHorn Brewhouse, we’re constantly experimenting with new recipes, inventing two or three brand new beers a month. Since we opened in April 2015, we’ve created over 40 unique varieties of beer!

We get inspired by tasting different beers from around the globe, imagining what types of beers might work well with different foods, or even taking flavours from foods we like and trying to get those flavours into a beer.

Learn more about your favourite brew and perhaps discover a new one!

IPA (India Pale Ale)
Today, IPAs are by far the most popular craft beer style thanks to their complex, hop forward flavour and aroma. Modern Craft IPAs tend to feature even more hops, than their 18th and 19th century ancestors, while Imperial IPAs like FogHorn’s Edmund Fitzgerald go even further, doubling or even tripling the amount of hops, but also adding more sweet malts for balance. The resulting beer has huge hoppy highs and deep malty depths with a high ABV to match.

Brown Ale
The term brown ale encompasses a wide variety of beers which share a similar brown hue, yet can be very different in taste and aroma. Surprisingly food-friendly beers, brown ales can carry mild to strong roasted malt, chocolate and caramel notes in both flavour and aroma.

Pale Ale
Like its darker cousin the brown ale, pale ale is a broad term that covers many different lightly-coloured ales, including not just “pale ales” but also IPAs, golden ales, blondes and more.

Wheat Ale
Wheat ales are so-named because they are brewed using high percentages – anywhere from 30% to 65% – of malted wheat. Traditional wheat ales do not filter out the yeast, resulting in a cloudy, pale to light amber beer with a long-lasting head.

The higher proportions of wheat malt makes wheat ales light, refreshing and great for summer drinking. They are often slightly fruity and like FogHorn’s The Ideas Beer , boast full flavour and body.

Saison
Ideal summer beers, saisons usually range from golden to light amber in colour. With earthy and spicy yeast characters, a fruity flavour and aroma plus a cracking dry finish, farmhouse ales styles like FogHorn’s 4 Saisons in One Day are characterised by their yeast complexity and pair perfectly with seafood.

Porter
A stepping-stone to stouts, Porters are brewed using a pale malt base with the addition of black, crystal, chocolate or smoked brown malts. The typical Porter is dark brown, featuring a full malt body and rich, nutty caramel sweetness. Porters like FogHorn’s Revolution Brown Porter are very sessionable with a low ABV.

Stout
Stout is the darker, stronger big brother of porter and comes in many different varieties, the most popular being the dry Irish-style, like FogHorn’s Dubliner Stout. Characterised by their strong roast, coffee and chocolate flavours, stouts are versatile and can range from seriously heavy to surprisingly drinkable. 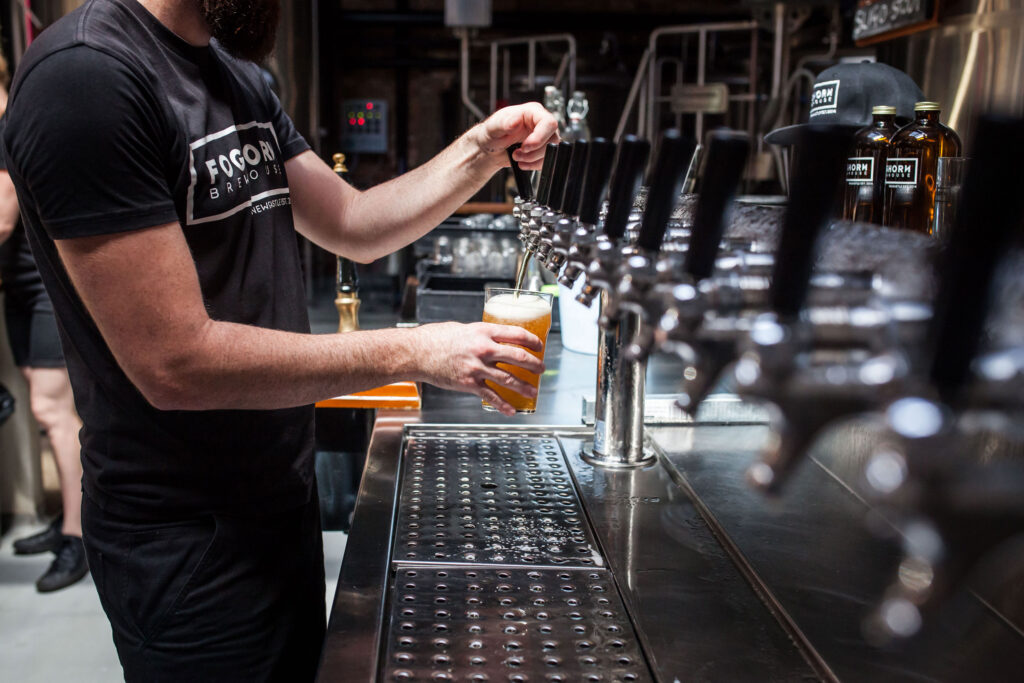